You are here: Home / Disney / Project Future. An Inside Look at Disney World!

Since our trip to Disney World back in February, we are all still talking about it.  We had an absolutely amazing time and I was awe struck by the different attractions and the hospitality shown by the staff.


Project Future by Chad Emerson is an easy and engaging read that feels as if you have stepped inside the mind of Walt Disney himself.  If you are a history or Disney enthusiast Project Future is a must read.  I am impressed with how thorough the book is historically speaking.  Emerson went to great lengths in order to include some very important details that you may have never known otherwise. 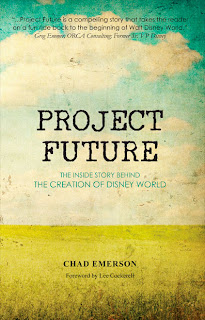 Excerpt from the Introduction:

“From obscure legal strategies to spy-like maneuvers, Disney’s eastern plans, code named Project Future, were built upon a brilliant mix of fantasy and reality. The complexity of the final result, the Walt Disney World Resort, was rivaled only by the complexity of the method used to achieve it. Throughout the entire effort, two restrictions repeated themselves at almost every stage: Disney’s insistence on secrecy in the process and Disney’s desire for control of the product. This is not to say Disney had any nefarious intentions with these goals. Instead, the commitment to secrecy and control were natural extensions of frustrations Disney had encountered in previous creative projects.
Project Future would be Disney’s most daunting challenge yet. For the grand vision to succeed, Disney examined lessons learned from the past and committed to avoiding them in the future. In the end, Disney’s quest for a Florida project would be built less on pixie dust than on a determined, clever effort to turn an isolated piece of Central Florida into one of the world’s leading tourist destinations.
This is the story of how Project Future forever changed the American amusement industry….”

Project Future went on sale back in February and is available on Amazon.com as well as online at the Project Future Book website.  This one of a kind book would be excellent for Mother’s or Father’s Day and retails for $14.95.  Have fun stepping back in time!  Just a warning that there is some language when Emerson is quoting Disney in one instance in particular.