To say that Davis loves VeggieTales would be an understatement.  That kid eat, sleeps and breathes VeggieTales!  As soon as he wakes up he wants to watch them.  We have to listen to them in the car and you better believe that if we are going on a trip we need to bring along the DVDs.  So, I’m not exactly sure why it took me so long to figure out what to make him for Halloween.  One of my closest friends is the one who suggest he be Bob the Tomato because she also knew of his love of singing vegetables.  I thought it would be an easy one to make and decided to go the easiest route possible and make it a no-sew!  The beauty of this costume is that it could easily be a pumpkin or any other round object you desired.

What you will need: 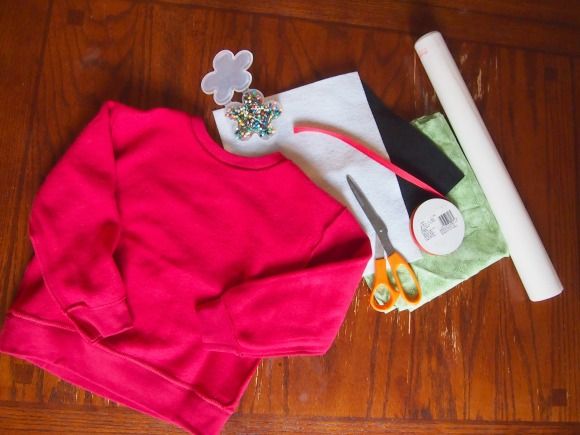 First of all, let me just say that finding a red sweatshirt in October is no easy feat!  I wasn’t looking for orange, but maybe you will have more luck with that one.  I ended up finding one at Walmart and turning it inside out (there was a print on the front).  You also want to buy a size that is about 3 times bigger than your child’s current size.  So, following the hem of the sweatshirt, turn it up in order to create a hem.  Pin this hem into place.

Next, you are going to cut slits into the hem all the way around about an inch to a half inch apart.  The closer the slits the more cinch you will have on the bottom of the costume (creating more fullness).

Weave the ribbon through the slits making sure to leave the two ends sticking out on the outside of the sweatshirt (so that you can create a tie in the back).  Remove the pins.

Cut the sleeves off of the sweatshirt before the seam.

Using your felt, cut out a face and use the iron-on adhesive to make it stick in place.  You can use one of the sleeves to create the nose for Bob.

Put this on over a black shirt and black pants.  Cinch the shirt up in the back to create a full or rounded look and then tie.